From a medical point of view, pain in the lower abdomen is recognized as hypogastric pain. Generally, lower belly pain is associated with menstruation, forming part of the so-called Premenstrual Syndrome (PMS). This pain characteristically presents as a colicky type (the pain rises and decreases in intensity spontaneously), simulating cramps at that level and may also be accompanied by nausea or vomiting.

However, many anatomical structures are found at this level, which can cause pain in that area without being related to menstruation. Next, FastlyHealwe will know why lower stomach pain appears without menstruation and the leading causes.

Among the gynecological causes that explain unregulated ovarian pain, the following stand out:

This is the name given to the woman’s circumstance experiences all the hormonal changes typical of her menstrual period. Still, in the end, ovulation does not occur, so menstrual bleeding does not happen later. Even all the symptoms of premenstrual syndrome can occur.

Another cause of uncontrolled ovarian pain could be the appearance of cysts in the ovary (fluid-filled formations) that cause pain by distending the lining of the ovary and compressing neighboring structures, causing pain in the left lower abdomen or straight.

PID is caused by infection of the gynecological system, usually when acquiring sexually transmitted disease (STD). STDs can simulate the pain in the lower abdomen that occurs in many women during menstruation without being present.

The infection of the walls of the urinary bladder and its inflammation originates symptomatology very similar to menstrual pain, but with the only difference that other symptoms may coexist, such as:

Learn more about the infection in the article Cystitis: causes, symptoms, and treatment.

The presence of multiple cysts in the ovary degenerates into a hormonal imbalance that causes different manifestations. One of them is a pain in the hypogastrium in the absence of menstruation.

Different types of dysfunctions at the level of the pelvic floor, such as proctalgia fugax or anodyne, can simulate menstrual pain without a period.

The endometrium is the tissue inside the uterus. This development in places of the pelvis or the abdomen can produce lower belly pain.

Uterine myxomatosis (or fibromatosis) occurs when portions of the uterine muscle tissue grow irregularly, forming small lumps that can cause cramps and uterine bleeding between periods.

The narrowing of the cervix can prevent the discharge of secretions that the uterus produces typically. This condition can present as hypogastric pain as well.

This rare immune condition can cause lower belly pain without menstruation. Autoimmune oophoritis occurs when the immune system reacts against the ovarian tissue, causing inflammation, dysfunction, and uncontrolled ovarian pain.

Ovarian pain in menopause is another cause of ovarian pain without menstruation. During premenopause and menopause, discomfort in the lower abdomen may occur that simulates the usual menstruation pain, but in this absence.

Here we explain other symptoms of menopause. 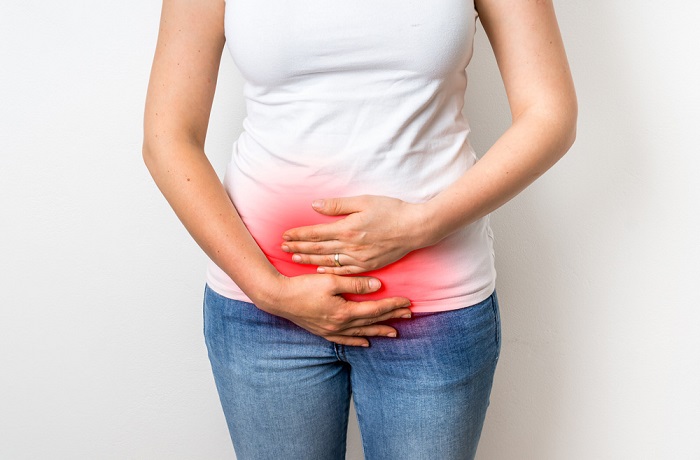 Ovarian pain without periods. Could it be pregnancy?

Indeed, another cause can explain uncontrolled ovarian pain in pregnancy.

The ovarian pain without periods can be pregnancy, and this symptom appears especially during the first weeks of pregnancy. In this case, the pregnancy symptoms that could accompany this lower belly pain are:

If you think you may be pregnant, here is another FastlyHealarticle about The first symptoms of pregnancy.

The occurrence of a spontaneous or induced abortion, complete or incomplete, can cause low abdominal pain of variable intensity that will require surgical resolution to avoid complications.

Here we explain whether it is normal to have pain after an abortion? 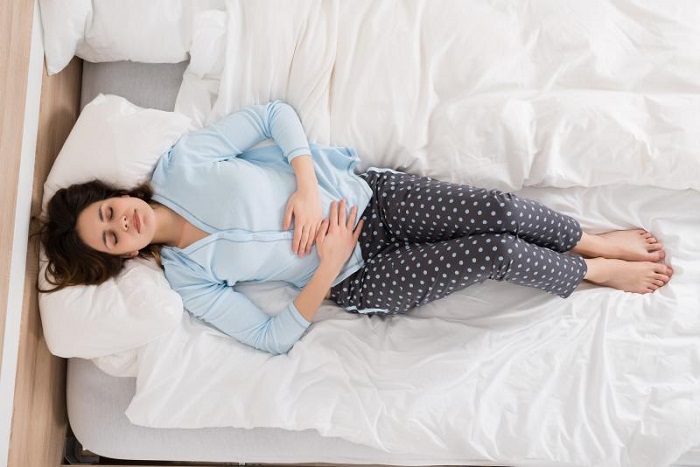 Other causes of lower belly pain without menstruation

Other causes that can respond to low wind pain without menstruation are:

Acute appendicitis (when the appendix is ​​behind the cecum or in some other abnormal position) can mimic hypogastric pain in the absence of a period. Here we explain more about the symptoms of appendicitis in women.

A Meckel’s diverticulum is a small sac-like formation that appears in the wall of the small intestine in its final portion, in the last 90 centimeters. It can cause symptoms that simulate acute appendicitis or lower stomach pain without menstruation.

Inflammatory bowel disease is a disorder that involves different portions of the small and large intestine. Its symptoms include pain at the hypogastric level, similar to that during menstruation.

Unlike menstruation, other symptoms coexist, such as:

All these causes of ovarian pain without regulation are merely indicative. If your pain still does not go away, it is recommended that you go to your doctor as soon as possible.

In case you suspect that your lower belly pain without menstruation is due to an ovarian issue, some of these articles may help you to reduce the pain and inflammation of the lower belly:

If you want to read more articles similar to Lower stomach pain without menstruation: causes, we recommend that you enter our category of Female reproductive system.