At some point in your life, you may bleed again after a few days after having your period. Bleeding outside of your period is often a cause for concern, so it’s understandable for you to wonder if Bleeding after your period is typical or ask yourself questions like, “why am I bleeding if I don’t have my period?”

Fortunately, all the possible reasons for this Bleeding can be treatable in time. Commonly, it is usually related to pregnancy, ovulation itself, or even the use of some contraceptives. In more severe cases, it can also be associated with the presence of polyps and even an ectopic pregnancy. Whatever the reason, a timely medical diagnosis is essential. If you want to know more about this topic, we invite you to continue reading this article by FastlyHealin concerning the causes of Bleeding after the rule.

All vaginal Bleeding is considered normal in a regular cycle every 28-35 days with 3 to 7 days. I was bleeding after menstruation is deemed to be abnormal, and is that any bleeding outside the rule is far from ordinary.

Ovulation is one of the cases where there may be bleeding after the rule. This is usually minimum bleeding of approximately two days and usually coincides with the middle of the menstrual cycle, that is, approximately on day 14, in the case of women whose cycle lasts 28 days.

The cause of these bleeds is hormonal changes, precisely due to the increase in the luteinizing hormone LH or ovulation hormone, as it is also known. However, it is not very common. Ovulation bleeding is also often called breakthrough Bleeding or ovulatory spotting. The color of blood is less intense red than menstrual Bleeding.

Second, concerning the causes of Bleeding after the rule, we find stress. This factor directly affects hormonal changes and, in turn, conditions the appearance of bleeding outside the cycle. Fortunately, it can be channeled with relaxation therapies, exercises, and even aromatherapy.

Use of contraceptive methods

In most cases, contraception usually regulates the menstrual cycle and prevents Bleeding between periods. However, constantly changing birth control pills, or first-time use of birth control such as the IUD, is considered a cause of Bleeding after the menstrual period. Bleeding usually occurs due to the body’s adaptation to the new contraceptive. It usually disappears as soon as the body adapts to the number of hormones it is receiving or according to the type of contraceptive.

Polycystic ovaries are nothing more than the presence of multiple cysts in any one of the ovaries. Its appearance triggers a hormonal imbalance reflected in Bleeding after the standard period. This condition should be evaluated immediately by the specialist so that they can recommend the most appropriate treatment for each case. In this other FastlyHealarticle, we tell you all about Polycystic Ovaries: symptoms, causes, and treatment.

This is another common reason for breakthrough Bleeding or Bleeding after your period. It usually occurs just at the time of implantation, but not in all women. It is estimated to occur in 3 out of 10 cases. The embryo’s implantation can cause the rupture of some of the multiple blood vessels, veins, and arteries supplying the endometrium, causing the characteristic implantation spotting, but that does not comply with the Bleeding characteristics that usually follow occurs by the rule.

According to an article published concerning non-organic abnormal Uterine Hemorrhage 1, it has been concluded that abnormal Bleeding is present in at least 30% of the female population of reproductive age. It has been described there that after having analyzed 4,054 women with abnormal Bleeding, 51% were younger than 45 years old, 38.7% were between 45-65 years old, and 10% were more aged than 66 years. In addition, associated causes of polyps were determined as a diagnosis in 33.9%, endometrial hyperplasia in 15%, fibroids in 7.5%, and other causes in 21%. 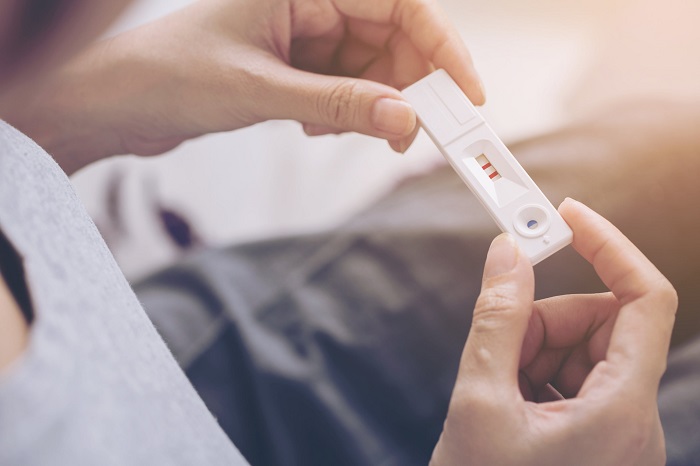 Other causes of Bleeding after your period

Other causes associated with Bleeding after menstruation that is a bit more serious but not difficult to treat if diagnosed early are:

Some other possible reasons are:

Should I go to the doctor if I have Bleeding after my period?

Every woman should know that the uterus lining is called the endometrium. It is there where the embryo is implanted in case of fertilization. In the absence of pregnancy, the endometrial tissue will begin to shed once a month, approximately every 28 to 31 days. This peeling process is what happens during normal menstruation.

The reasons described above as causes of Bleeding after the rule can affect the endometrium making it more sensitive and unstable and triggering this symptom. If this occurs, it is advisable to go to the gynecological consultation, although the cause does not always represent a serious health problem.

To determine the amount of Bleeding, it is crucial to check how many pads are used in a day and how often they are changed. Also, you should be cautious if :

Usually, the doctor performs a Pap smear or cytology to determine if there is any abnormality from the cervix or ultrasound to determine changes in the uterus, ovaries, and fallopian tubes. Both are necessary for a good diagnosis in case of Bleeding after the rule.

If you want to read more articles similar to Bleeding after the period: causes, we recommend that you enter our category of Female reproductive system.