Ovarian cancer is the fifth most common cancer in women and causes more deaths than any other type of malignancy in the female reproductive system. In this pathology, the cells that form the tumor are produced in the tissue of the various female glands that secrete eggs and the hormones estrogens and progesterone located in the pelvis, one on each side of the uterus. This cancer is estimated to be suffered by 1 in 70 women and is much more common between 65 and 80.

Ovarian cancer has almost no symptoms in its early stages. For this reason, in most cases, this type of cancer is diagnosed when the background is already advanced, and the tumor has spread outside the ovaries. As in all kinds of cancer, the prognosis of this disease is more favorable if the cancer is detected in an early stage. If you want to know more about ovarian cancer: symptoms, causes, and treatment, keep reading this article by FastlyHealcarefully.

Ovarian cancer is a disease that does not usually present specific symptoms. Still, its manifestations are often confused with pathologies related to the digestive system, which makes diagnosis difficult and favors detecting the condition in its most advanced stage. Therefore, the most characteristic ovarian cancer symptoms are evident in the most advanced stage of the disease and include the following manifestations:

The cause of ovarian cancer is unknown. However, certain factors have been identified associated with an increased risk of developing this disease. The risk factors for ovarian cancer are:

The processor trauma that occurs during each ovulation so that the egg can leave the ovary has been considered linked to the formation of ovarian cancer. For this reason, women who have not been mothers or have given birth to only one child are at greater risk of developing this disease since during pregnancy, there is a rest of ovulation. Birth control pills are also considered to lower the risk of ovarian cancer.

Women with a family history of ovarian or breast cancer are also at increased risk of developing this disease due to possible abnormalities in the BRA1 and BRC2 genes. 30% of ovarian cancer cases have a genetic mutation.

Taking estrogen therapy for more than five years without being combined with progesterone is also considered a risk of ovarian cancer. Also, the older the woman, the greater the risk of developing this disease.

Factors That Decrease Your Chance Of Ovarian Cancer 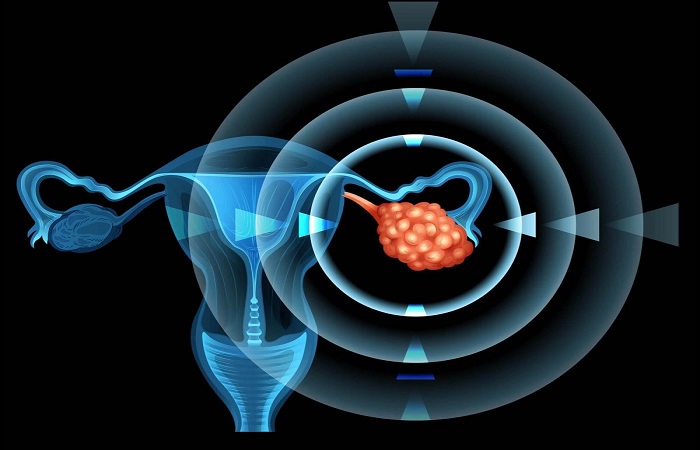 Surgery is the treatment used to treat ovarian cancer in its phases. When the disease has been found early, surgery may be the only necessary treatment. When ovarian cancer has been detected in an advanced stage, other treatments such as chemotherapy may be required.

It may include the removal of the ovaries, uterus, tubes, and any other part of the female reproductive system where the tumor has spread. The lymph nodes in the area will also be removed and, like all the removed tissues, will be biopsied.

When the stage is very advanced, it may be appropriate to remove even intestinal fragments to ensure that all possible tumor extensions have been removed. When the tumor is massive, much of it will be removed, and the rest will have to be removed with chemotherapy.

It is usually carried out after surgery or when surgical removal of the tumor is not the first option, and its size needs to be reduced beforehand. Chemotherapy consists of the intravenous administration of chemicals capable of eliminating malignant cells from the body. The number of sessions and the type of medication administered will depend on the stage of the disease and the objective of the treatment. Chemotherapy for ovarian cancer can also be given intraperitoneally (in the womb).

The constant check-up and systematic analysis of tests such as hematology, tumor markers, and biochemistry are necessary to keep track of the evolution of the disease. CT scans and MRIs are also part of the referral process.

If you want to read more articles similar to Ovarian cancer: symptoms, causes, and treatment, we recommend that you enter our category of Female reproductive system.

How to prevent sexually transmitted diseases