The hemorrhoids appear when increased pressure occurs of the anus, which may be due to multiple causes. Among the common factors that lead to the development of piles is constipation, exerting great effort during bowel movements, standing or sitting in an inappropriate position for a long time, being overweight, or suffering from certain diseases such as liver cirrhosis. In addition, it has also been noted that people with a family history of hemorrhoids are at higher risk of suffering from them; and that they are a widespread condition in pregnant women, especially in the last weeks of gestation due to the pressure exerted by the uterus on the hemorrhoidal veins or the great effort made during childbirth.

Two types of hemorrhoids are distinguished according to the point of location in the anus; thus, we can speak of internal and external hemorrhoids. 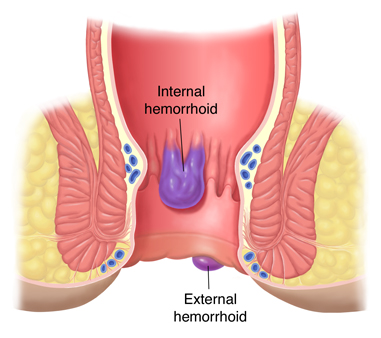 In very mild cases, hemorrhoids can be asymptomatic, but their symptoms will depend on the degree of inflammation. Usually, in patients with piles, the following are observed:

It will be imperative to see your doctor immediately if heavy bleeding and other symptoms such as dizziness, vertigo, or fainting are experienced simultaneously.

The treatment of hemorrhoids should be determined based on the severity of the symptoms. Still, in most cases, it is a condition that can be cured by adopting simple daily measures and a series of healthy lifestyle habits. This will reduce discomfort and speed up the healing process of piles.

First of all, constipation must be fought, as it is one of the main responsible for the appearance of these lesions. For this, it is essential:

Regarding pharmacological treatment, corticosteroid creams and ointments may be helpful to reduce both the discomfort and inflammation caused by piles; analgesics, also to relieve pain; laxatives, in case of constipation that does not improve with changes in diet; or venotonics, which are suitable for patients of hemorrhoids with active bleeding or acute hemorrhoidal thrombosis.

When suffering from piles, personal hygiene plays a significant role in healing. It is advisable to avoid using toilet paper whenever possible, especially that scented or fragranced. It is preferable to use wet wipes or do a sitz bath with warm or cold water and dry the area with a soft towel without rubbing. If you do sitz baths for about 10 to 15 minutes, you can reduce discomfort considerably. Likewise, the affected area should not be scratched or touched to avoid aggravation, and it is recommended to use cotton underwear.

If these measures do not work and the hemorrhoids do not respond to the treatments and, on the contrary, become worse, it will be advisable to consult with the doctor as other procedures may be necessary. An in-office treatment called infrared coagulation may be needed, which involves the application of heat to reduce the size of the lump. On the other hand, elastic bands can also be placed at the base of the piles to strangle it until it falls on its own after a few days.

If the latter is not enough, the doctor will consider the option of some surgery. Usually, hemorrhoidectomy is carried out, which removes hemorrhoids and is regarded as the most efficient technique for those internal hemorrhoids that have not responded to any of the other treatments.

If you want to read more articles similar to Hemorrhoids: types, symptoms, and treatments, we recommend entering our Digestive System category.

How to reduce inflammation of thrombosed hemorrhoids

Tips to prevent hemorrhoids in pregnancy

When are hemorrhoids operated