How to reduce inflammation of the paranasal sinuses

Rhinosinusitis is a widespread problem. It is inflammation of the paranasal sinuses, which is always associated with a certain degree of nasal inflammation.

This can be of an allergic cause or be favored by the presence of structures that prevent the passage of air inside the nose, for example, when the septum has deviated. In other cases, it may be due to an infection, for example.

Next, in this FastlyHealarticle, you will find information about the best treatments to solve rhinosinusitis, both acute and chronic, and you will know how to reduce inflammation of the paranasal sinuses.

Why are sinuses inflamed?

The sinuses are air-filled cavities that are located just around the nose. One of its primary functions is the production of mucus. This mucus lines both the paranasal sinuses and part of the airway and serves to protect the mucosa and defend against foreign particles of all kinds.

For the sinuses to function well and remain healthy, it is essential that the nose is porous and allows air to pass through.

If the nose becomes blocked, either by inflammation, a blow, or a deviation of the septum, the opening that connects the sinuses with the nose can also be covered. Thus, the mucus will continue to be produced within the paranasal sinus, but it will not come out, generating much discomfort.

Among the most frequent causes of inflammation of the paranasal sinuses, we can find:

Symptoms of inflammation in the sinuses

When the sinuses become inflamed and mucus accumulates, various symptoms can appear. The signs will differ depending on whether it is an allergy, an acute viral or bacterial infection, or a rather chronic inflammation.

In this case, there are usually:

It can be complicated by some of the other types of rhinosinusitis.

It is a virus infection usually resolves when the proper measures are taken.

Among the most important symptoms are:

Symptoms can be permanent or worsen at certain times of the year and are often related to habits. It is chronic when rhinosinusitis lasts for more than three months.

This type of rhinosinusitis usually presents with:

To reduce inflammation of the paranasal sinuses, you can resort to drugs, surgeries, natural remedies, and, what I consider more effective, review your habits so that problems do not occur again.

The medication that is usually used to reduce inflammation of the paranasal sinuses can be applied both locally and by mouth, and the choice of one or another drug will depend on the cause of the inflammation, the patient’s health status, and the preferences of both the professional who It indicates it as from the person suffering from rhinosinusitis.

They are widely used in medical practice. On the one hand, the physiological solution (or similar) can wash the nose so that the mucus does not stagnate. On the other hand, anti-inflammatories are used, which are generally corticosteroids. These corticosteroids can also be:

These are drugs that act throughout the body, including the nose, promoting anti-inflammation and, in some cases, acting on infections.

Endonasal surgery can help resolve some cases of rhinosinusitis, especially when not responding to medical treatment.

The surgical option will be raised by the medical professional. In that case, it will be explained what the surgery consists of, the postoperative care, and what is expected of this long-term treatment. Each case is different and, therefore, must be carefully analyzed.

Among the most common reasons for surgery are:

Different types of approaches can be performed, either through the nose, through endoscopic or direct vision, or other accesses depending on the affected paranasal sinus (for example, through the mouth in some cases of maxillary rhinosinusitis).

How to reduce inflammation of the sinuses naturally.

Nature offers various options to improve sinus inflammation. Of course, it is more than essential to study why the breast or breasts are inflamed since otherwise, we will incur a superficial treatment of the symptoms.

Identification of the cause

This is essential to solve any cause of rhinosinusitis. It consists of going a little beyond the apparent symptoms, delving into other symptoms and imbalances, and finding their relationship.

Fundamentally, lifestyle habits that have to do with eating, smoking, exercising, sleeping patterns, digestion, etc., should be reviewed. Look a little further at what may be related to inflammation.

In this way, it is possible to act earlier when the problem occurs.

Several substances can be included in the diet daily or taken through infusions, and that help reduces inflammation throughout the body, including the sinuses. Is about:

You can find much more information about this technique in the article How to do a nasal wash. It consists of cleaning both sides of the nose and sinuses to free them of mucus and facilitate the entry of air, which will be essential to help their healing. 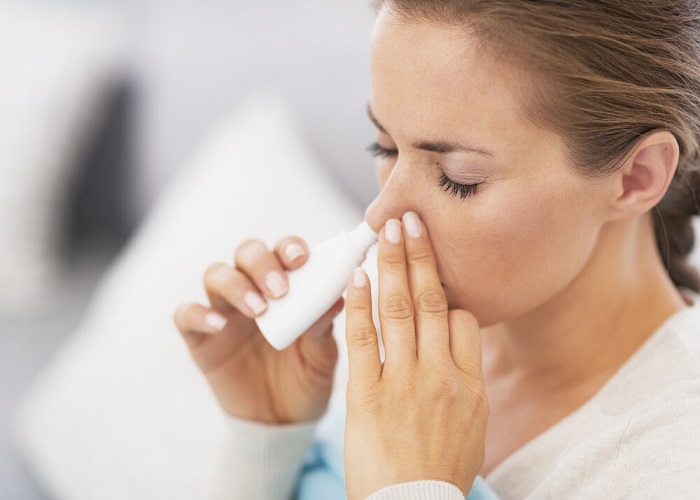 If you want to read more articles similar to How to reduce inflammation of the paranasal sinuses, we recommend that you enter our Ear, Nose, and Throat category.

Causes of dry and irritated nostrils?

Why does my nose get stuffy at night