Cervical cancer or cervical cancer is one of the most frequent among females and by which malignant cells form in just tissues of the uterus bottom (matrix). Its development is prolonged and initially manifests itself through cervical dysplasia., which refers to abnormal changes in the cells of the cervix, which can lead to cervical cancer if treatment is not received. This pathology is usually asymptomatic in the beginning. Still, it can be detected early during a simple routine gynecological examination, hence the importance of insisting that women should not ignore or forget about this type of test. An early diagnosis will be essential to recovering favorably, and cancer does not spread to other body areas.

At FastlyHealwe, help you know all the details you need to know about cervical cancer, showing you its causes, symptoms, and treatment.

Several risk factors can be distinguished linked to cervical cancer, but the most important and the leading cause in most cases is the human papillomavirus (HPV). This is a virus transmitted from one person to another through sexual contact and of which many types can be differentiated. Some of them can cause significant changes in the cervix and increase the risk of this type of cancer; however, others cause the appearance of so-called genital warts. To learn more about this sexually transmitted disease and adopt the appropriate prevention measures, we recommend that you read the article Genital warts: contagion, symptoms, and treatment.

Not all women with an HPV infection will develop uterine cancer. In addition, it must be taken into account that other risk factors influence the incidence of this disease. These are the following: 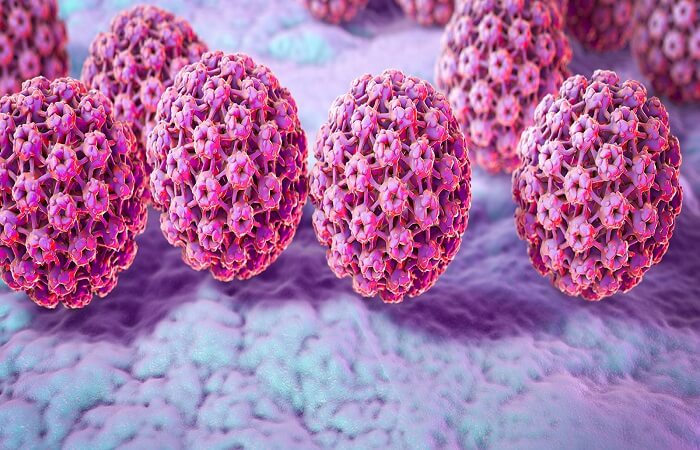 In the early stages, cervical cancer is usually asymptomatic and most likely causes no visible signs or symptoms. Its development is relatively slow and, for this reason, it is so important to undergo gynecological tests periodically to identify the HPV disease or the existence of abnormal cells if that is the case. Also, its prognosis is much more favorable when it is detected early.

When uterine cancer begins to manifest itself, a woman may experience the following symptoms :

In those cases in which cervical cancer is in an advanced stage and has been able to spread, affecting other parts of the body, the patient may present any of the following symptoms:

It is essential that you consult your doctor early before any of the symptoms described here. And is that although many of them can be caused by other types of conditions, it is essential to rule out the possibility that it is cervical cancer.

Cervical cancer can be diagnosed early through regular gynecological tests. The two most important that a woman must undergo to prevent or detect this disease are the Pap test, also called vaginal cytology, and the so-called HPV test, which is used to detect the virus that could lead to cervical cancer Overtime. All women must undergo those tests that their doctor advises them, in addition to experiencing vaginal cytology once a year when they are over 21 years old or have begun to have sexual intercourse.

If the physician observes abnormal alterations in these tests or suspects that there are cancer cells, they may order other tests such as the following:

The form of cervical cancer treatment can vary from one patient to another, and it is determined based on different factors, such as the stage of cancer, the patient’s health, her age, if desired, having children, etc. Next, we detail the different treatments the specialist can consider to deal with this disease.

The precancerous or cancerous tissue is removed. In the case of cervical cancer detected early, surgical procedures such as LEEP are usually carried out, eliminating tissue utilizing electricity; cryotherapy, a technique that freezes cancer cells; or laser therapy.

However, in more severe and advanced cervical cancer, a hysterectomy may be required, in which the uterus and nearby tissues that have been damaged are removed. In very extreme cases, a pelvic evisceration may be necessary, which involves the removal of the pelvic organs.

The use of high-intensity radiation to fight cancer may be advised as a single treatment before surgery or alternated with chemotherapy. It can lead to specific side effects, such as fatigue, weakness, dry skin, loss of appetite, nausea, vomiting, diarrhea, etc.

Particular drugs are given to shrink or destroy the tumor. These can be given orally or intravenously and often cause side effects such as nausea, vomiting, diarrhea, tiredness, loss of appetite, low white blood cells, bruising, numbness in the hands and feet, headaches, loss of hair, skin, and nails. Darkened.

If you want to read more articles similar to Cervical cancer: causes, symptoms, and treatment, we recommend that you enter our category of Female reproductive system.

How often should I visit the gynecologist