White spot on the nipple: causes and treatment

If you have a kind of white spot on your nipple, you may be wondering: what is it about? Will it be normal? How do i remove it? What should I do? Do not worry. Not always what appears in the breast is related to something evil, the great fear of many women.

Going to the doctor will clear up the doubt. However, the most common causes of these whiteheads are related to breastfeeding and are known as milk pearls. Other less frequent are Montgomery tubers, allergies, or pimples. Each of these conditions with specific characteristics and individualized treatment. To understand all the causes of a white spot on the nipple and its treatment, continue reading this article from FastlyHeal.

White spot on the nipple or milk pearl

The most common cause of the appearance of a white spot on the nipple is known as a milk pearl, and it occurs precisely when the woman is breastfeeding her newborn. It is a bright white pimple located anywhere on the nipple and is usually very painful.

On the other hand, there are other causes related to a white spot on the nipple that is less frequent than the milk pearl but worth knowing and treating correctly.

Montgomery’s tubercles are sebaceous glands located in the nipple that tend to become more noticeable during pregnancy and breastfeeding under the hormonal stimuli produced in this stage of the woman.

There are 12 to 20 glands in each nipple, but not all are visible after hormonal modifications. Between 5 and 15, Montgomery tubercles are observable.

These fulfill a particular function. They are in charge of lubricating the skin of the nipple and areola. They can become infected or obstructed, generating pain and showing a white spot on the nipple.

White spot on the nipple: other causes

Other less frequent causes of whiteheads on the nipple can be:

White spot on the nipple: treatment

The proper way to treat the white spot on the nipple will depend on the cause and the appropriate medical evaluation. Treatment may include:

If the white spot on the nipple is due to a milk pearl, the leading medical recommendation is to breastfeed the baby in a comfortable position so that the milk duct is unblocked. Using this procedure, the milk pearl usually disappears after 5-7 days.

In some cases, if the pain is severe, the doctor may order oral pain relievers and anti-inflammatories. Applying local heat allows the milk ducts to expand and facilitate their emptying.

It is crucial in this case that you consider the alarm signals to go to an emergency medical evaluation. This is in point of fever or severe inflammation.

Avoid pricking the milk pearl unless the doctor determines the cause of appearance and indicates otherwise.

By themselves, they usually disappear after a few days. The best thing, in this case, is undoubtedly to avoid touching them to keep the nipple protected. You can also change your bra when the tubers become much more evident. This will avoid irritation.

In addition, it is essential to clean this area with neutral soap to prevent the mammary glands or tubers from being affected by excessive sweating and bacterial growth.

If white spots or pimples on the nipple are related to an allergic reaction, it is essential to see a doctor determine the corresponding cause. Once the cause is eliminated, the allergic reaction will disappear, the doctor to give the diagnosis may indicate allergy tests.

In this case, the main recommendation is not to squeeze the pimples or touch them until they have completely dried and disappeared on their own. Remember that this is a sensitive area to abuse with fingers or nails.

The best way to effectively treat the presence of whiteheads on the nipple is to follow the medical indications in each case. It would be best if you never forgot that the essential recommendation is not to touch them until the specialist defines and specifies the cause. 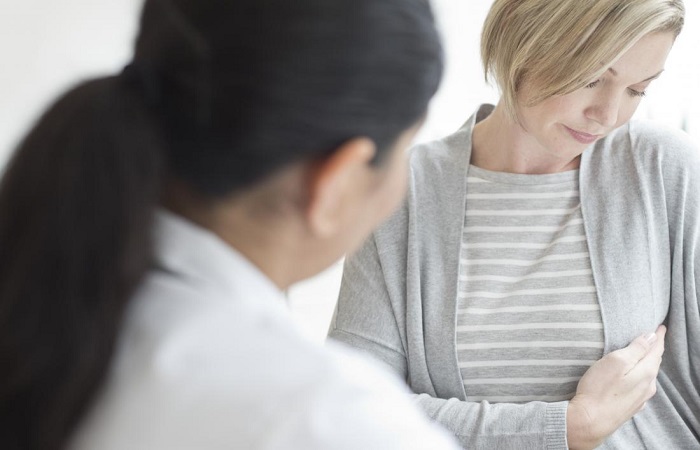 If you want to read more articles similar to White spot on the nipple: causes and treatment, we recommend that you enter our category of Female reproductive system.

Stitches in the breasts: causes

Why do I have a hard nipple and it hurts?