All women know what menopause is and, more or less, the symptoms it produces. However, on many occasions, climacteric is spoken of, especially in medical terms, and many people confuse it with menopause. Both occur in the mature age of the woman and have the same symptoms, but you have to know how to differentiate them because they are not the same. Menopause is when the woman stops being fertile, and conditions occur. The climacteric, meanwhile, is the condition that encompasses premenopause, menopause, and postmenopause. Therefore, the main difference is that they are different processes in which one of them (climacteric) includes the other (menopause), but not the other way around. However, in this FastlyHealarticle, we more depth explaining the differences between menopause and climacteric.

At what age does the climacteric arrive?

The climacteric is a complete cycle from when the woman begins to produce fewer eggs until she stops generating them ultimately. Therefore it encompasses the premenopausal, menopausal, and postmenopausal periods. It is a transitional period in the life of an adult woman. The climacteric can start sooner or later, but it is usually in the 40s, beginning with premenopause.

If you are a woman in your 45s or older, you may be experiencing particular body or organic changes that are confusing you. But it has an explanation, and it is called premenopause. It is the first stage of climacteric, and from then on, your body will begin to change until menopause. During this first stage of a milestone, the ovaries stop producing eggs and, therefore, estrogens and progesterone, the female hormones, also decrease.

In this first stage, we will know that the climacteric has begun because the decrease in hormones will cause irregular or scanty menstruation, even if there are still them. It may go away for a few months and reappear. The moment that menstruation completely disappears, it means that menopause has arrived. In the following article, we show in more detail what are the symptoms and treatments for premenopause.

However, each woman is different, and premenopause does not mean that menopause will be immediate. This period can last between 2 and 8 years. In this case, it is advisable to go to the doctor so that he can advise you. Above all, you must bear in mind that the chances of getting pregnant will begin to decrease considerably.

After this period comes menopause, which we will see below, the next phase. And after menopause, postmenopause occurs, which is also part of the climacteric. There are symptoms very similar to menopause during this last stage but much milder.

It is the moment when the last menstruation takes place. It occurs during the maturity stage of women and is the dividing line between the ability to fertilize or not. Once a woman enters menopause, she is no longer fertile.

As we have seen, during premenopause, the woman begins to have irregular or scanty periods, or there may even be several months without menstruation. However, to be considered menopausal, a woman must have been without periods for more than a year.

This stage comes after premenopause. Therefore, it will depend on each woman from when, but we can say that it usually appears between 40 and 50 years. In this process, the body changes, and no more eggs are produced, so female hormones are at their lowest point. This results in the symptoms of menopause, including a decrease in the size of the uterus and a decrease in libido. 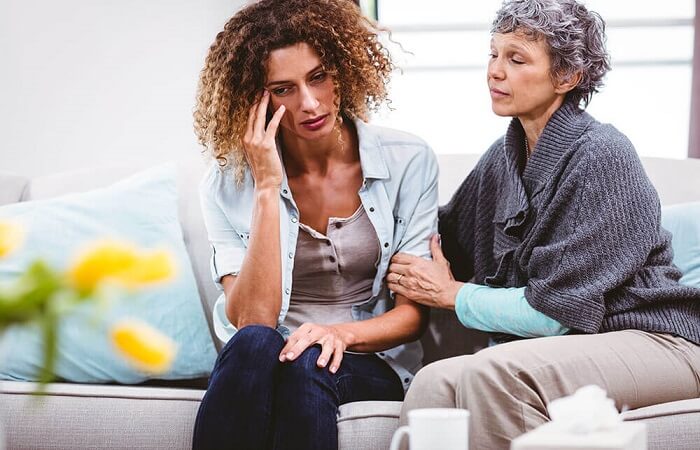 During premenopause, the main features are poor or irregular periods and hot flashes. In addition, the woman in this stage may suffer other symptoms, such as breast pain, insomnia, abdominal distension, being more irritated or unstable, a lot of discharge, or vaginal dryness.

During postmenopause, on the contrary, the symptoms of menopause decrease and become increasingly mild—for example, sweating or palpitations. Hot flashes also stop. However, hot flashes continue to exist and cause increased heart activity, and tachycardia or headaches may occur. It must be borne in mind that hormones are still lacking. Due to this and the weakening of the bones during postmenopause, there is a greater risk of suffering from cardiovascular or bone diseases such as osteoporosis.

It is also normal for vaginal infections or excess discharge to occur during climacteric due to decreased vaginal lubrication.

The symptoms of menopause are very similar to those of the climacteric, so it is easy to confuse them. However, we have seen the differences between menopause and climacteric, even if one encompasses the other.

The menopause continues with the symptoms of premenopause, although much more substantial. In addition, the period disappears entirely, and the hormones are at their lowest level, so mood swings and body changes are much more marked at this stage. Each woman’s symptoms vary in intensity, and some women even have signs that others do not.

However, in general, the symptoms of menopause can be:

After menopause comes postmenopause, in which, as we have seen, the symptoms disappear or become milder.

In the following article, we show which foods help reduce the symptoms of menopause.

If you want to read more articles similar to Climacteric and menopause: differences, we recommend that you enter our category of Female reproductive system.

Foods to reduce the symptoms of menopause

After a year without periods, can you get...

Breast pain in menopause: causes and how to...

Is ovarian pain normal in menopause?